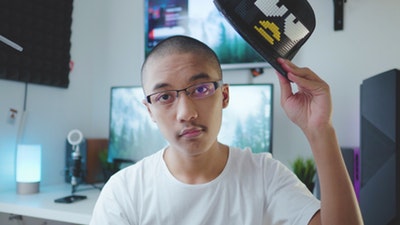 I want to argue that religious belief is not what you explicitly say… It’s the opaque, coded beliefs that lie behind it…

So for example, someone could belief in God and not be religious… and vice-versa someone could say “I don’t believe in God at all…” and yet be deeply religious.

I’ll use an example. Somebody could say, “I believe in God, because I’ve looked at philosophy and I’ve looked at the 5 ways of Aquinas and I’m just philosophically convinced that God exists.” Now what you actually find is that for quite a lot of people who say that, the coded message is: “Well, I grew up believing in God, I’m really scared that life is meaningless, that I’m gonna die and everything I do has no purpose… so I went and studied philosophy to find reasons to justify my beliefs, and then I pretended to myself that I believe because of the evidence.”

And we all do it. We all read books that justify the position we already agree with…

So somebody says “I believe in God because of the evidence”… but as soon as they get anybody who attacks their belief, they get really aggressive. Now what that belies is that their belief is not just some sort of philosophical belief, but they get psychological pleasure from the belief, because otherwise why would you get so pissed off when somebody doesn’t agree with you?

My problem with the New Atheism is that because the New Atheists are coming from the scientific discourse, they have a naive view of language. They think religion operates that the level of [explicitly stated] belief, so they attack [that]… So they up only attacking a form of fundamentalist belief, a form of psychotic belief, which is what I said before: where the split between the opaque, meta-language and [explicit language] isn’t felt…

I never understood this type of criticism of the New Atheism from liberal Christianity. The problem is not that the New Atheists have a “naive view of language.” The problem is that billions of religious believers really believe what they explicitly say they believe. If they didn’t believe what they say they believe, they wouldn’t try to teach young earth creationism as scientific fact, or blow themselves up, or outlaw gay marriage while citing ancient scriptures.

If you’re the kind of “emerging Christian” that doesn’t literally believe those things and isn’t trying to outlaw gay marriage, then most of the criticisms of the New Atheists are not directed toward you. The reply given by people like Peter Rollins